Since 2001, Barb the Brittle expert has perfected over 25 varieties of candy brittles and treats.  Each brittle has their own special story and is uniquely designed to accentuate taste, flavor, and quality.

A Southern Lady With a Flair for Design & Confections

It all began one Christmas… With a large family and limited resources, what better present than one made by hand? Barbara McGarrah knew exactly what to do; she’d make peanut brittle for every friend and relation on her list. Her dad, a “nutty professor” and expert in boiling, roasting and all things “pinder,” got her a bag of blanched peanuts.

When the bag arrived, Barbara went nuts. “I saw the bag and realized what 100 pounds of peanuts was,” Barbara gasped. “My husband looked at me like, ‘What have you done?’ ” After recovering, Barbara proceeded to produce mass quantities of brittle. “After making brittle for every family member I could think of, I still had 50 pounds left,” she moaned.

Barbara was in one sticky situation. Unable to locate a hungry elephant and incapable of “living with having to throw them away,” Barbara made more brittle to sell at the senior citizens craft show.

“My son said, ‘Mom, I can’t believe you’re taking this to the Senior Center where half the people can’t eat sugar and the other half don’t have teeth.’ ” But everything went smoothly. “It was the smartest decision I’ve ever made, because seniors are the people who grew up with brittle,” she said.

A fashion designer and seamstress (graduate of Florida State University), Barbara had to choose. Sew or stir? “Once I get rid of the nuts, I’ll go back to sewing,” she promised herself. But, “Every time I’d do one event, another would come up.”

Barbara incorporates nearly the whole nut family into her brittles. from standard peanut to almond, cashew, pecan, macadamia and pistachio, Then there are her chocolate brittles, including all the aforementioned nuts, dipped in flavored chocolates such as lemon, strawberry, orange, and spearmint. She even makes seed brittles, including sunflower, pumpkin and trail mix. Finally for those who prefer nut-free treats, Barbara offers “virgin” brittle that’s “never been touched by a nut.”

Barb was always curious about what would happen if the buttery brittle bits were added to other treats.  To this end, she has created unique confections like Homemade Brittle Ice Cream, Brittle Cookies, Brittle Nut Clusters, Brittle Pralines, Brittle Popcorn, as well as Brittle Pies.

Sage advice: “Never bite off more than you can chew. Keep everything in perspective and do everything one day at a time.”

“You’ve got to be able to listen, to see, and be in a position to follow your heart. In life, we can’t plan anything. If we’re patient and just wait for what we’re supposed to do, everything will fall in the divine order.”

Call us, stop by or ORDER ONLINE 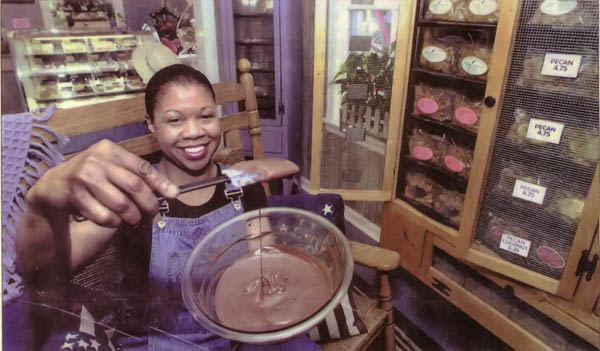